Instant Pot Shrimp Paella – All the rich flavors of classic Spanish paella but made in your Instant Pot and ready in 25 minutes! Plump and juicy shrimp, crisp-tender bell peppers and peas, all tossed in saffron and paprika seasoned rice! An EASY recipe that’s perfect for busy weeknights!

Paella is a centuries old rice dish originating from Spain and most often contains proteins including seafood, chicken, or sausage.

However, as is the case with many recipes that tend to be old, it’s common for them to take hours and hours to prepare. But in our fast-moving world, no one has time or desire to cook all day, especially me!

That’s where my shrimp paella recipe that’s made in an instant pot changes everything and saves you tons of time without sacrificing authentic paella flavor. 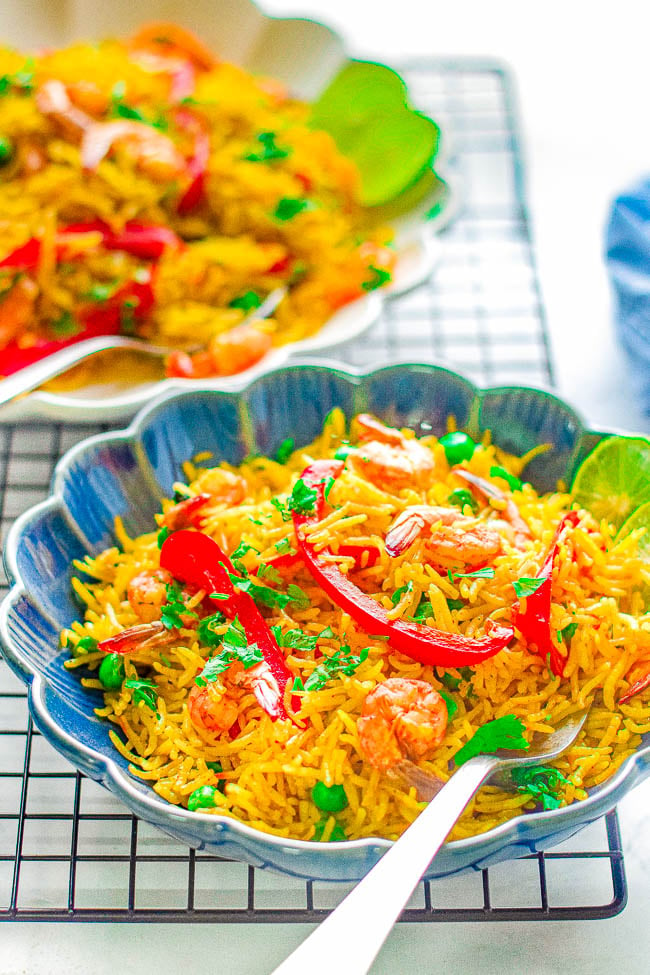 This shrimp paella made in an instant pot has a bold and strong flavor as paella should thanks to spices like saffron and paprika.

Plump and juicy shrimp are the star protein mixed into saffron seasoned rice along with crisp-tender bell peppers and green peas.

The dish is finished off with a spritz of lemon or lime juice and a bit of cilantro if you’d like. 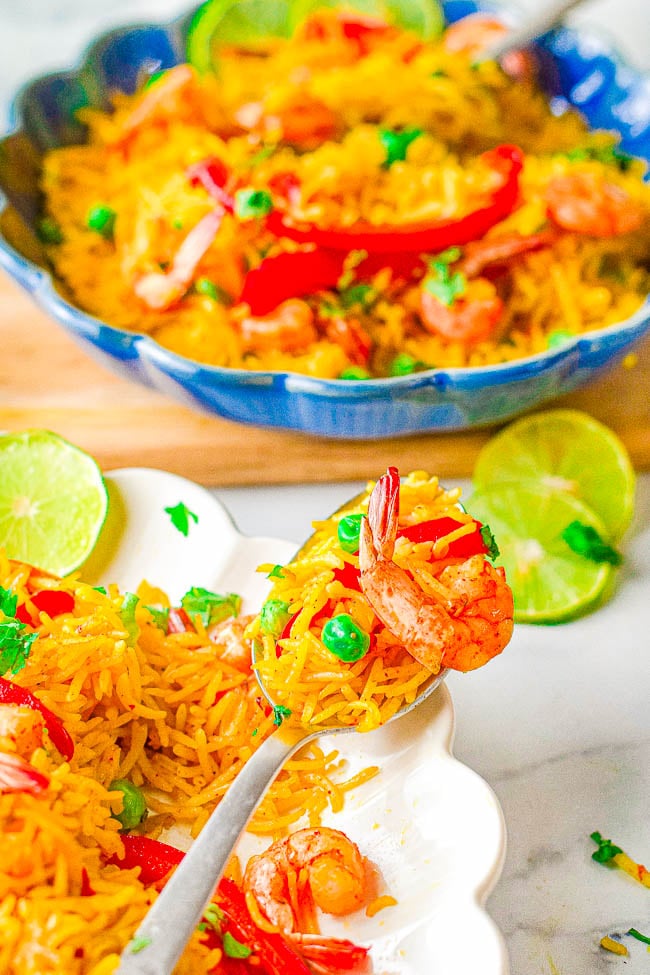 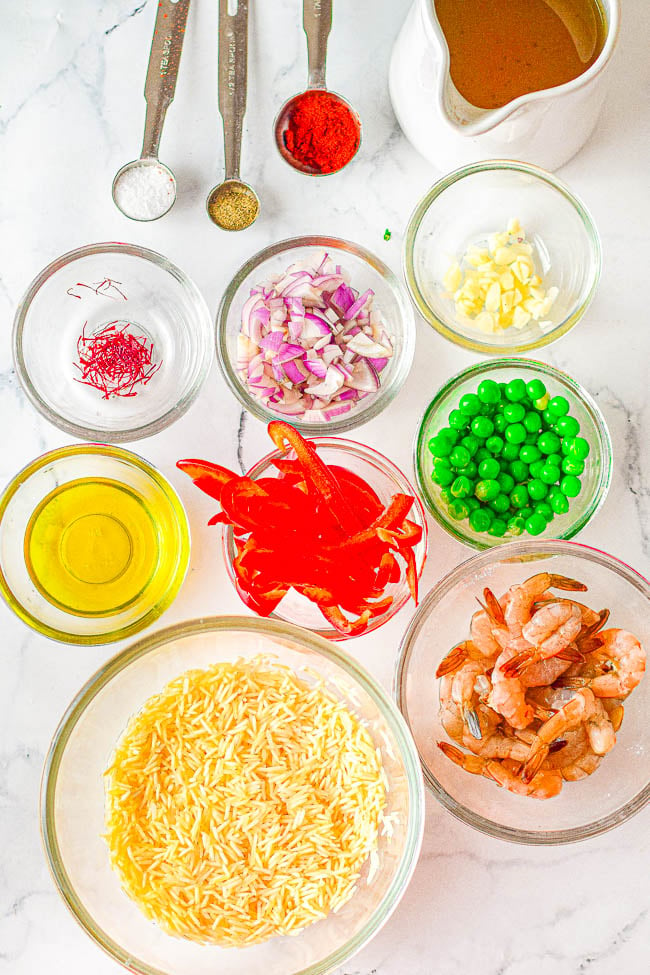 How to Make Shrimp Paella in an Instant Pot

Follow these easy steps to make paella with shrimp in an instant pot in just 25 minutes:

Step 1: Turn your instant pot to saute and add the oil.  When hot, add the onions, garlic, and saute for a couple minutes.

Step 3: Layer the shrimp on top in a single even layer and do not mix or stir. 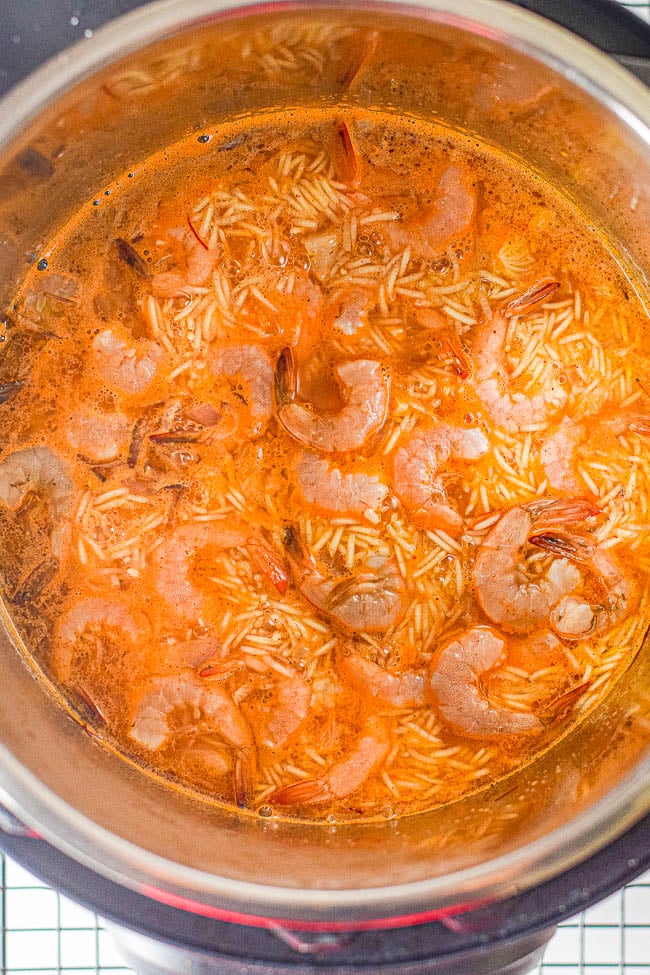 Step 4: Cancel or turn off the saute function, seal the lid, select pressure cook on high pressure for 6 minutes with valve sealed. 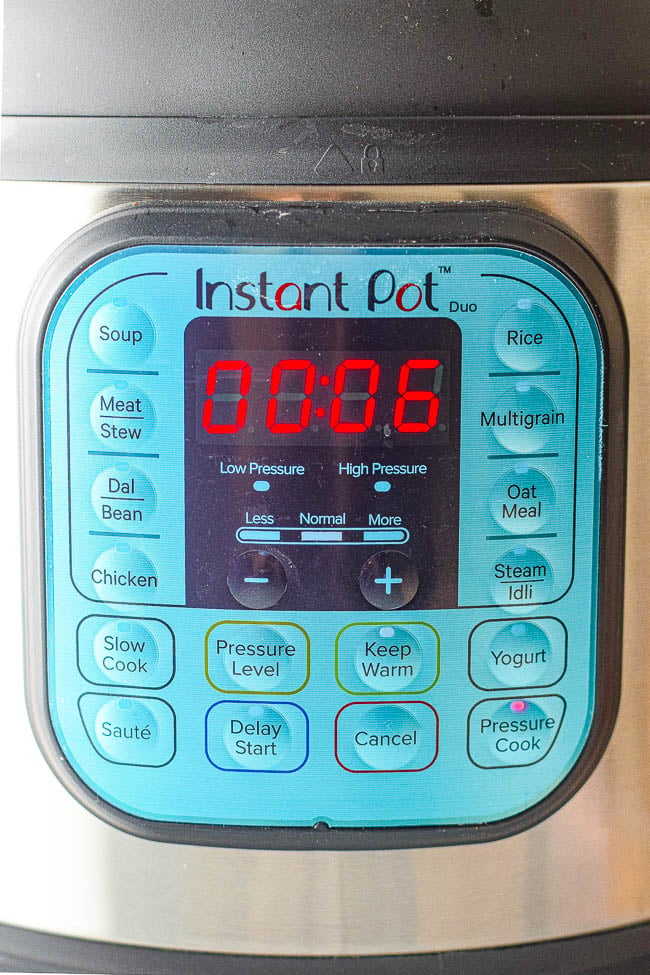 Step 5: Do a quick release by moving the valve from sealing to venting, open the lid, press the cancel button.

Step 6: Remove the shrimp from the instant pot and set aside in a large bowl. 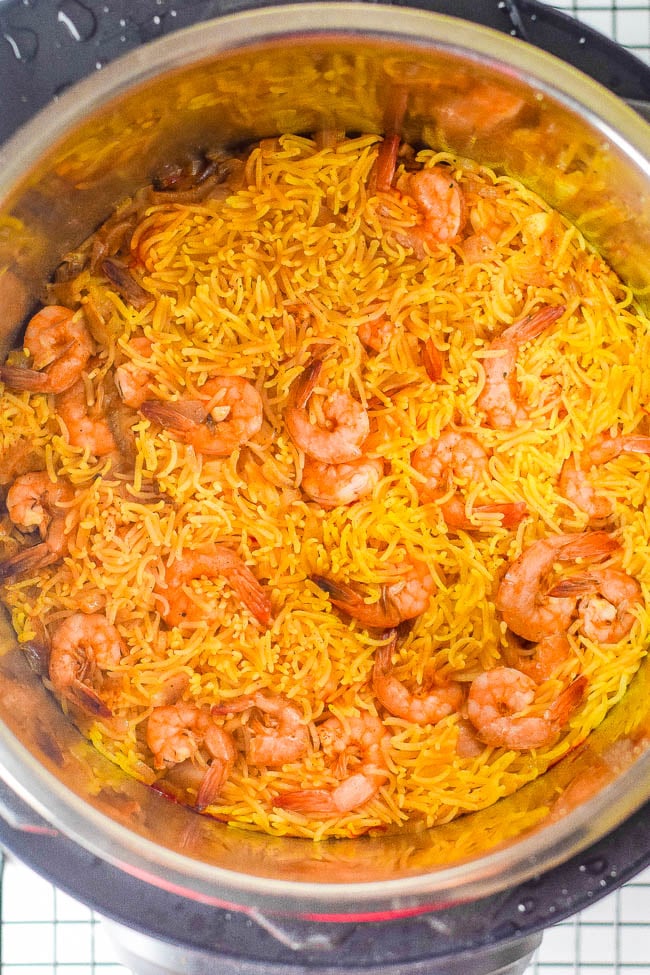 Step 7: Add the peas, bell pepper, select saute and saute for a couple minutes, then cancel. 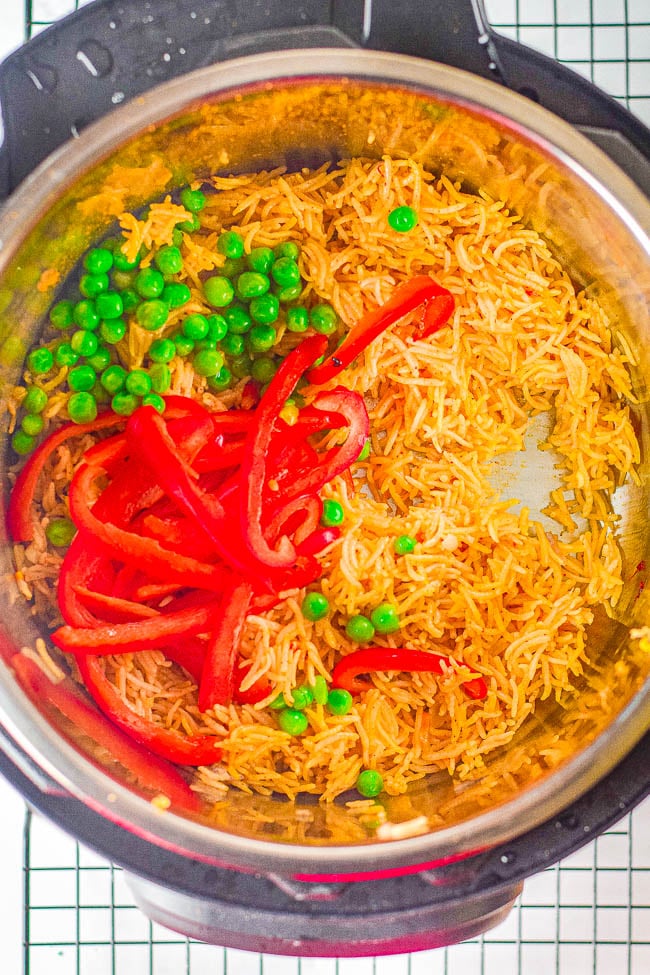 Step 8: Transfer the contents of the instant pot to the large bowl with the shrimp and stir.

Can I Make Shrimp Paella Without an Instant Pot?

Yes, you definitely can!

For those without an instant pot I recommend making shrimp paella on the stovetop in a large skillet using the same concept as I did in my Chicken Paella recipe, but substitute shrimp instead.

Simply saute the shrimp initially in your skillet with the onions, peppers, and garlic until it’s done, then removing it from the skillet, and carrying on with the remainder of the recipe as directed.

Add the shrimp back in at the end of the recipe.

Shrimp is more forgiving than chicken since it cooks in a fraction of the time. 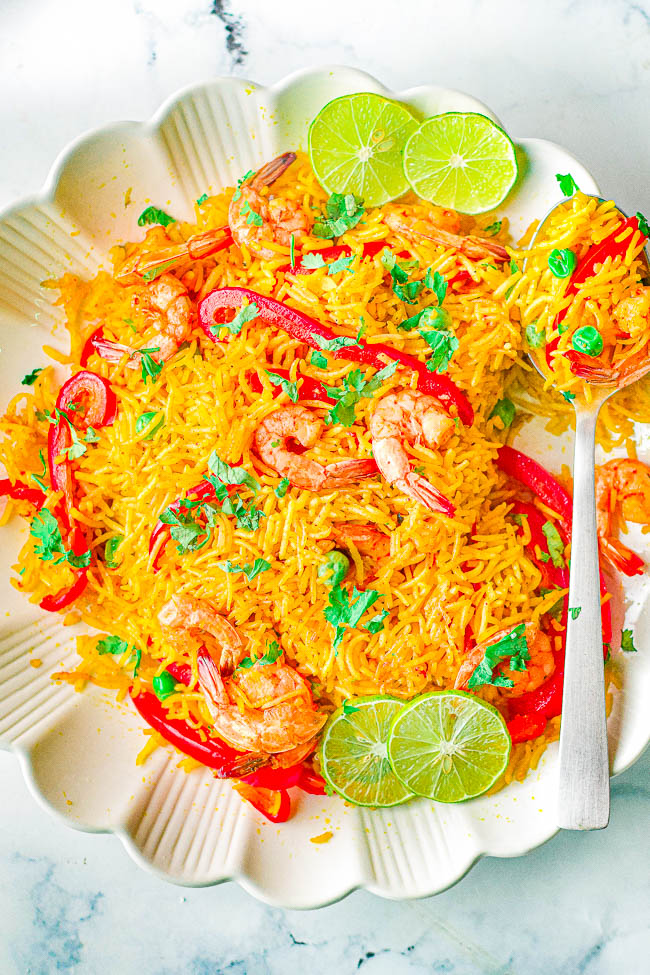 Do I Need a Paella Pan to Make Shrimp Paella?

You definitely do not need a paella pan if you’re making it on the stovetop. While it’s a nice thought, they are huge, bulky, and impossible to store in an average sized kitchen.

This is why I decided to embark upon making shrimp paella in an instant pot.

However, if you don’t have an instant pot, as indicated above, simply make your homemade paella with shrimp in a large skillet. 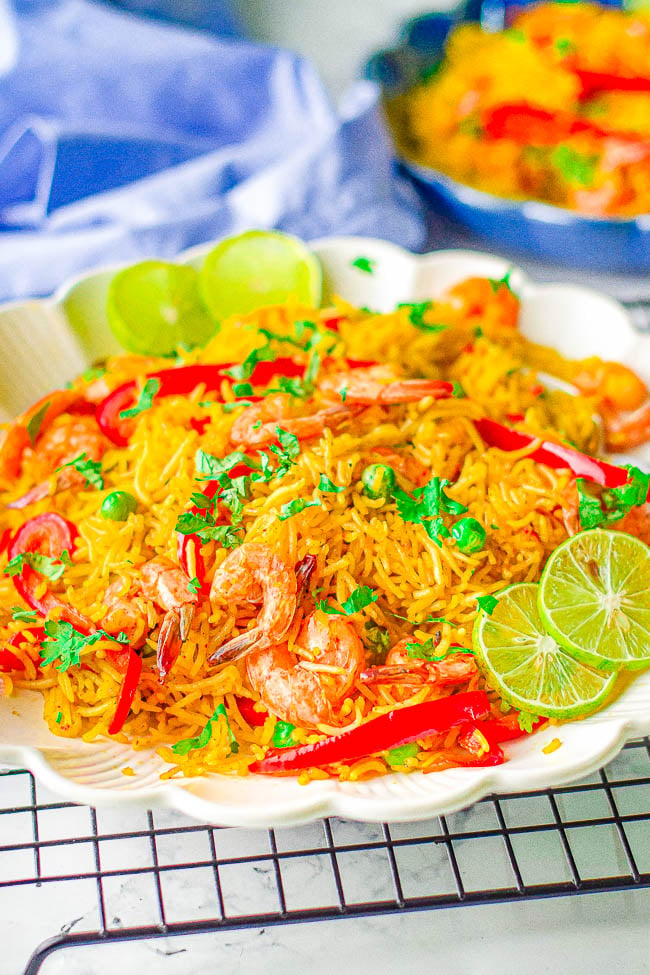 What Shrimp Are Best in Shrimp Paella in an Instant Pot?

For my shrimp paella, I recommend using medium-sized fresh shrimp that are cleaned, peeled, and deveined.

Approximately U30 to 40-count shrimp is what I suggest; meaning there are 30 to 40 shrimp per pound.

However, in this recipe you only need a half pound, so about 20 shrimp.

The shrimp cook in the instant pot so you need to start with fresh, uncooked shrimp, rather than previously cooked shrimp, including frozen shrimp that have already been cooked. Look for raw, fresh, medium-sized shrimp. 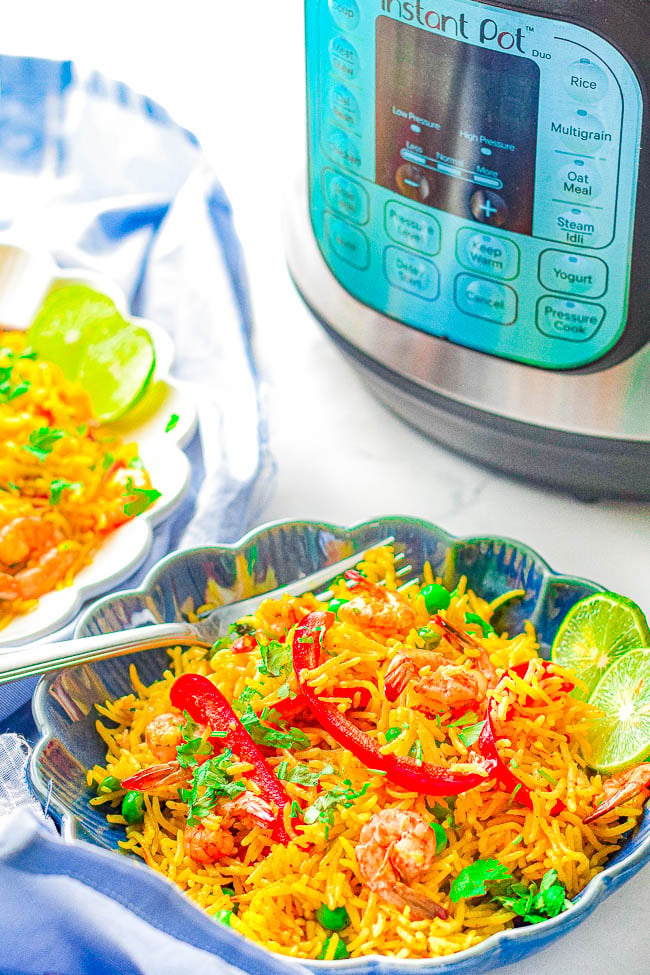 Can I Make Paella in an Instant Pot with Other Proteins?

For example, if you want to add clams or mussels, add them on top of the rice like you would with the shrimp.

The same goes for sausage.  I would use a precooked andouille sausage or kielbasa sliced in thin rounds, and place them on the rice without strirring.

If you want to add chicken, use small bite-sized pieces so it cooks through in the 6 minutes of pressure cooking. Keep it right on top like you would place the shrimp.

Keep in mind that the recipe was tested and written for shrimp only so you may need to slightly alter cooking times if you add a significant quantity of additional proteins. 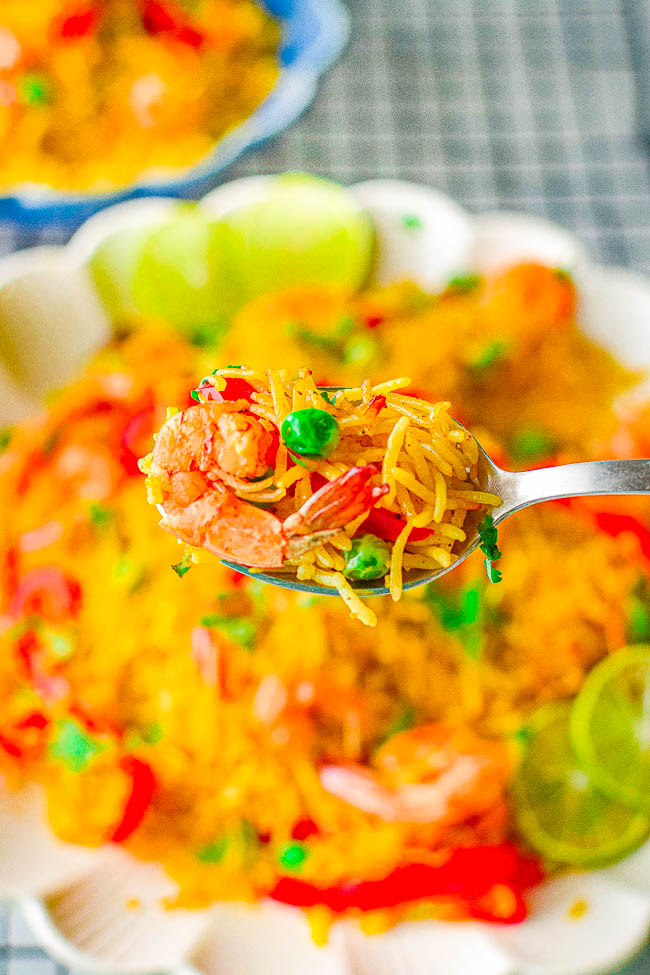 What Kind of Rice is Best in Paella?

Therefore, my recommendation is to use long grain rice. Although, you could use jasmine rice, too.

However, I don’t recommend substituting with any other types of rice.

All rice cooks a bit differently and it’s too hard to predict how other varieties will cook, how much liquid to add, and since I haven’t tested them I can’t promise how your paella will turn out. 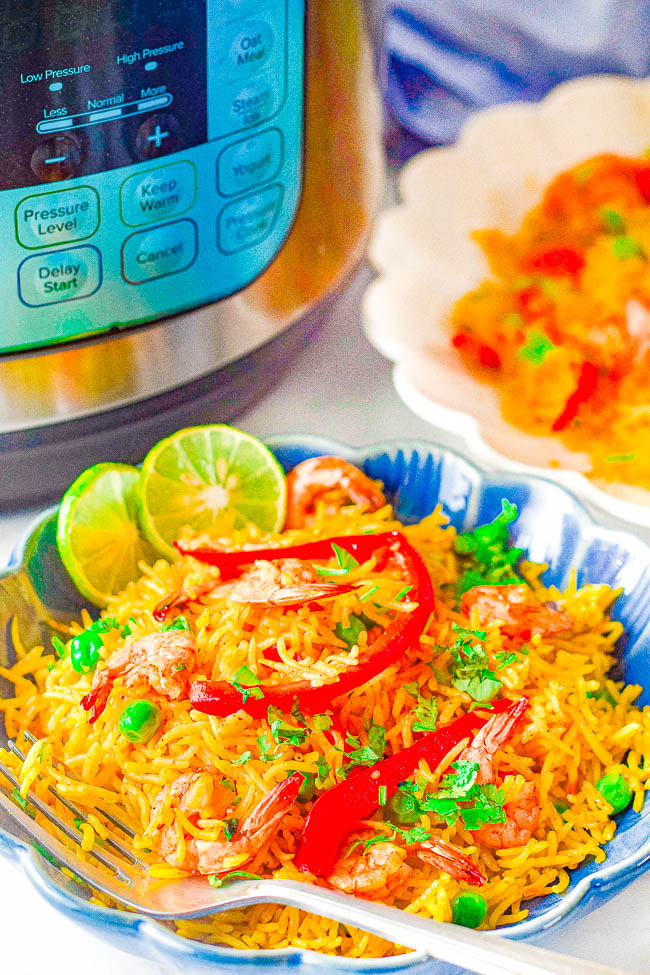 Paella is best when it’s served warm and fresh, especially when served with lemon wedge to squeeze over the finished dish and cilantro or coriander before digging in.

It will keep airtight for up to 4 days in the fridge or for up to 2 months in the freezer.

Being that there’s shrimp involved, I tend to be more cautious on my storage estimates than when talking about chicken or red meat since seafood is a bit more delicate in this aspect.

Most savory recipes I share on my site serve four to six, depending on appetites and the specific recipe.

My instant pot paella recipe, however, is a small batch recipe that should serve two.

This is in large part because instant pots by their very nature don’t hold a very large quantity of food.

However, if desired you can double the recipe.

You may want to increase the pressure cooking time to approximately 7 to 8 minutes instead of the 6 minutes indicated since the machine will be much fuller.

Please note though I’ve never doubled the recipe and am merely providing an educated guess.

Tips for the Best Shrimp Paella

Paella gets its distinctive yellow color and unique taste from saffron. While some people may replace the saffron with turmeric to achieve that yellow color, the taste may suffer.

For this I suggest to use good quality saffron to get an authentic taste.

In my recipe for Chicken Paella, I used a boxed seasoning mix called Paellero. I would liken it to using a packet of taco seasoning rather than using cumin, garlic powder, and so forth when seasoning taco meat.

While Paellero is nice and definitely delivers in the flavor department, for this recipe the flavor is built from scratch ingredients like saffron and paprika. Although if you happen to have Paellero on hand (not likely), you can use it instead of the individual spices I called for.

After adding the onions, garlic, rice, spices, and broth, make sure that nothing is stuck to the bottom of your instant pot.

The pot should easily deglaze when you add in the broth and anything stuck should loosen, but give a good stir at the bottom to make sure.

A very nice option to try here rather than using 1 1/2 cups chicken broth is to use 1 cup broth and 1/2 cup dry white wine such as chardonnay, pinot grigio, or sauvignon blanc.

The wine lends an ultra rich taste to the paella so if you have some open, give it a try! The alcohol burns off during cooking and what you’re left with is the luxurious depth of flavor the wine adds.

Pay close attention to which functions or modes you need to use on your instant pot in this recipe.

The recipe starts in saute mode, then high pressure cooking with a manual quick release, and back to saute mode.

*While the recipe was specifically tested to make paella in an Instant Pot or similar device, for those without an Instant Pot, I recommend following my Easy Chicken Paella recipe which is made on the stovetop in a normal large skillet.

**Pay close attention to which functions or modes you need to use on your instant pot in this recipe. The recipe starts in saute mode, then high pressure cooking with a manual quick release, and back to saute mode.

Easy Chicken Paella — If you’re never made paella before, here’s how with this EASY recipe ready in 45 minutes!! Juicy chicken and tender rice with onions, peppers, tomatoes, and more! So much FLAVOR in every bite!! 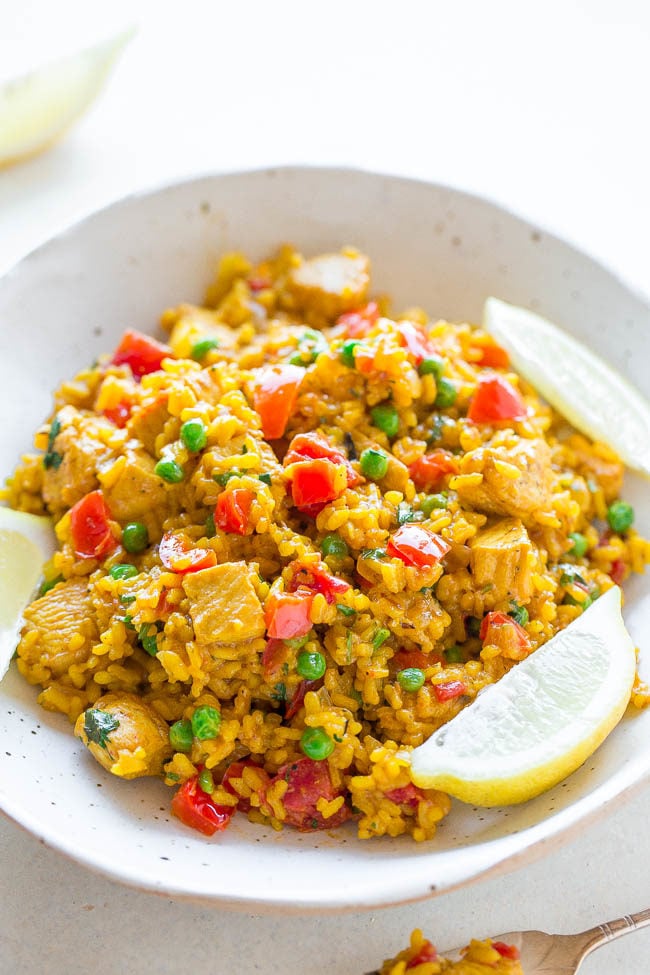 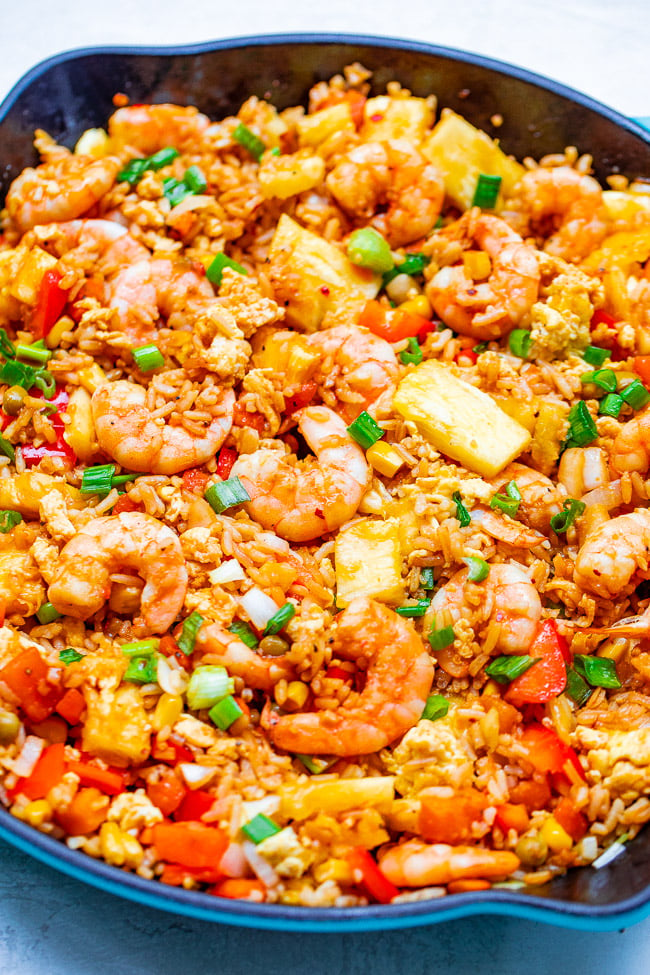 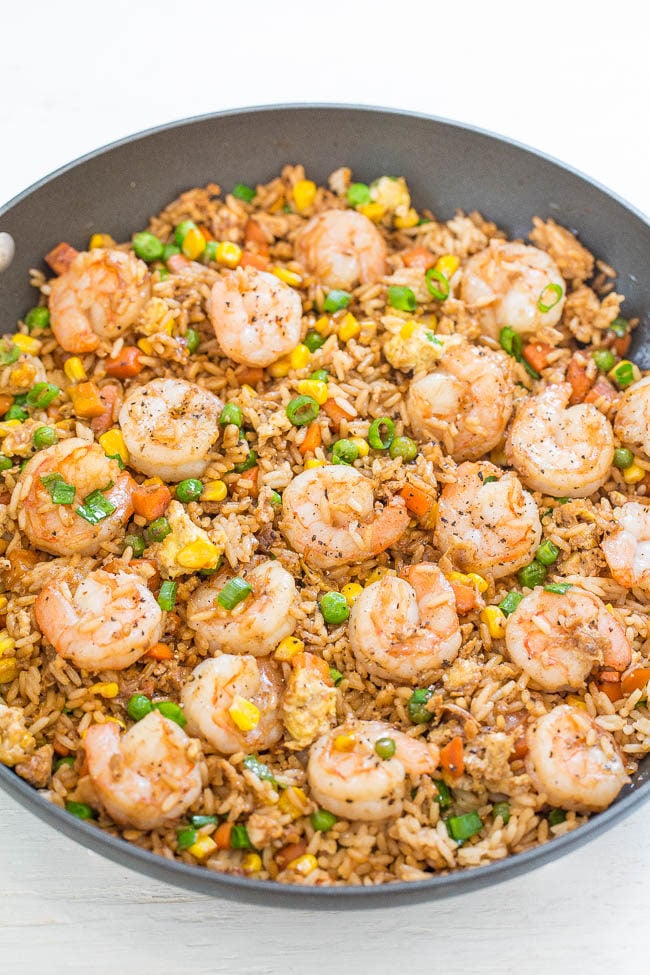 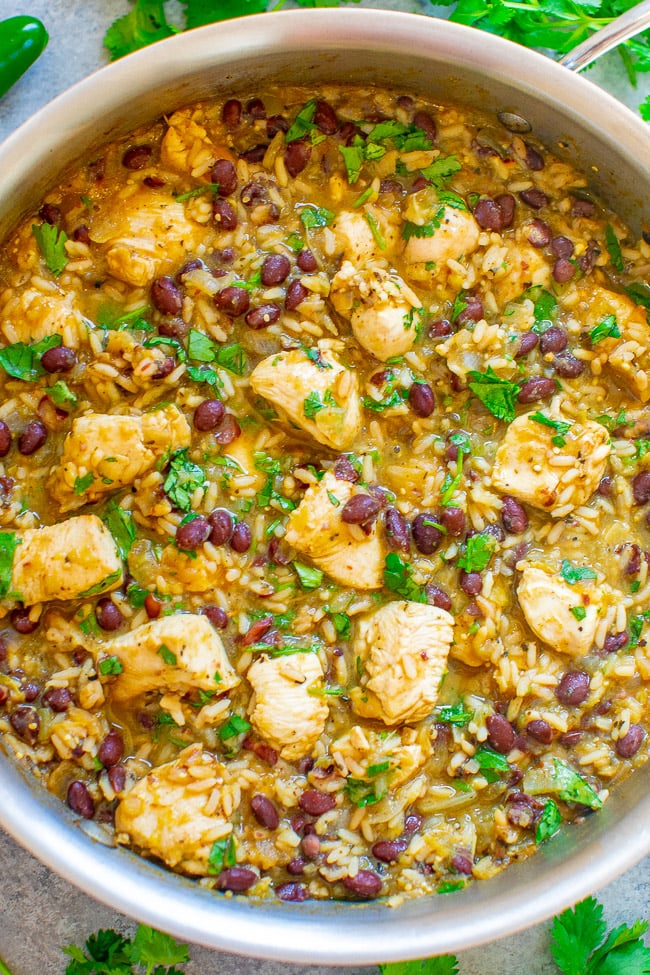 Mexican Rice, Beans, and Quinoa Medley – Hearty enough to be a meal or makes a FANTASTIC side dish with loads of textures in every bite!! A super FLEXIBLE recipe that’s HEALTHY and makes a big batch for planned leftovers!! 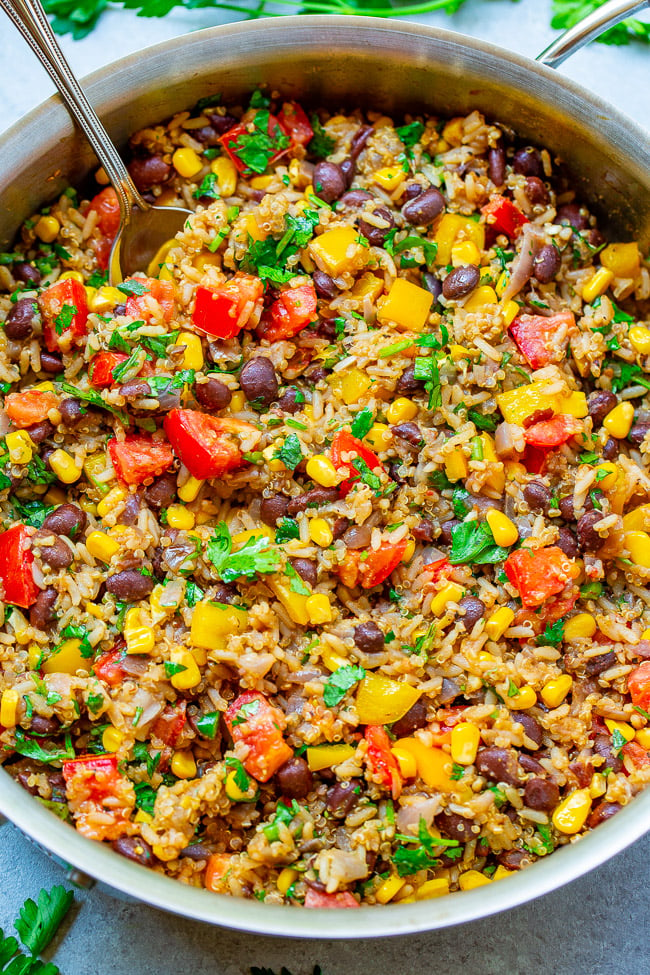 Buffalo Chicken Burrito Bowls — Juicy chicken along with your favorite burrito ingredients served in a bowl! Pile the toppings sky high and not worry about a wrap breaking, plus it’s a little healthier!! Easy and ready in 15 minutes! 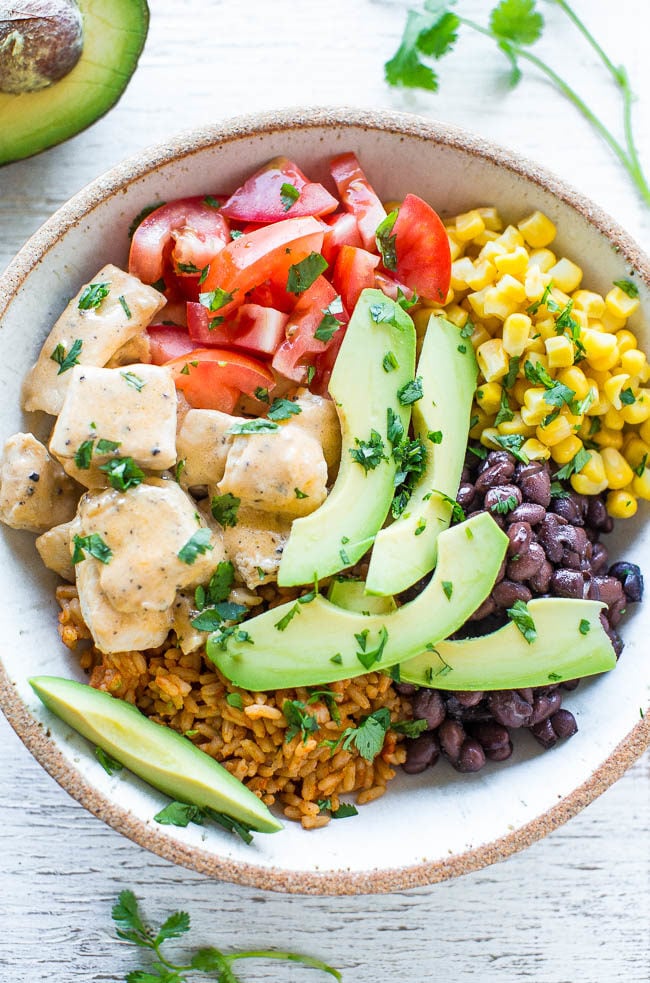 Lime Cilantro Chicken with Mixed Rice and Black Beans – Easy, one skillet, 15-minute meal! Tons of textures and bold flavors in every bite! The lime makes this dish just pop! 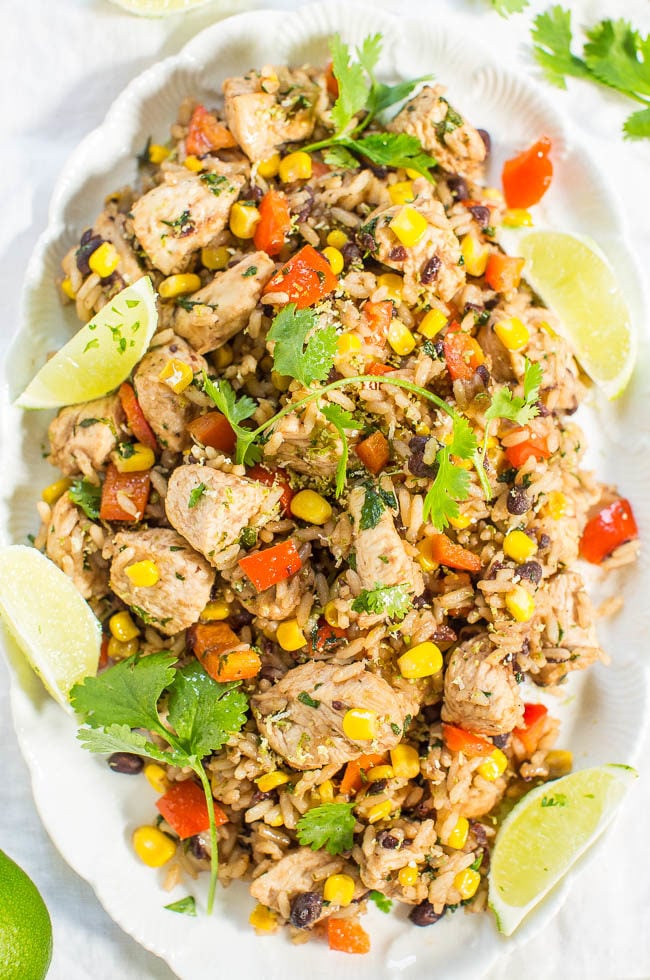 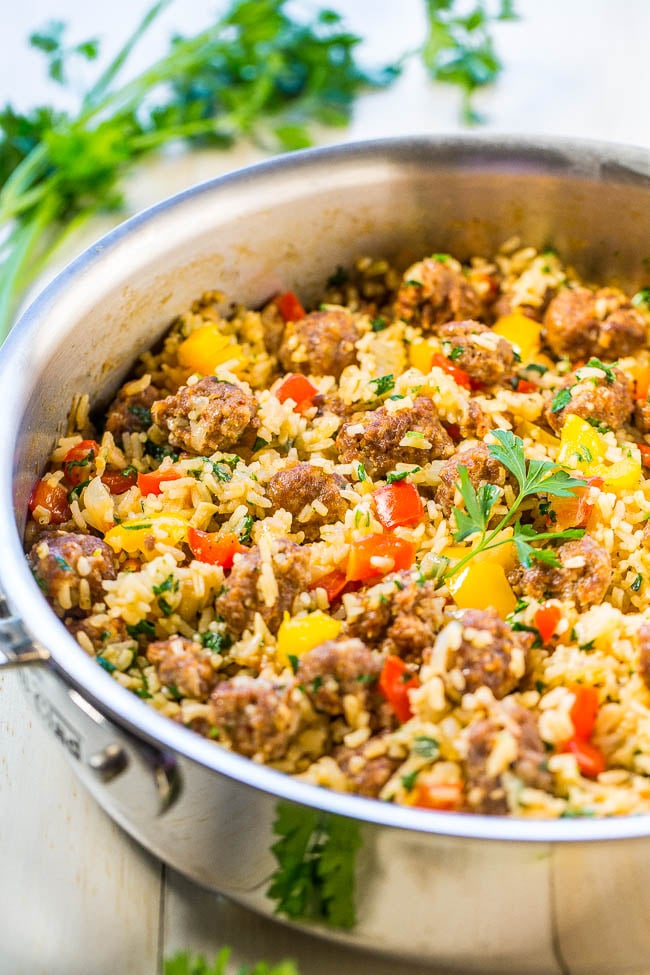 15-Minute Cowboy Beef and Rice Skillet – An EASY comfort food recipe with just 5 main ingredients made with everyday staples!! Juicy beef, tender rice, and just the right amount of kick from the salsa make this an automatic FAMILY FAVORITE!! 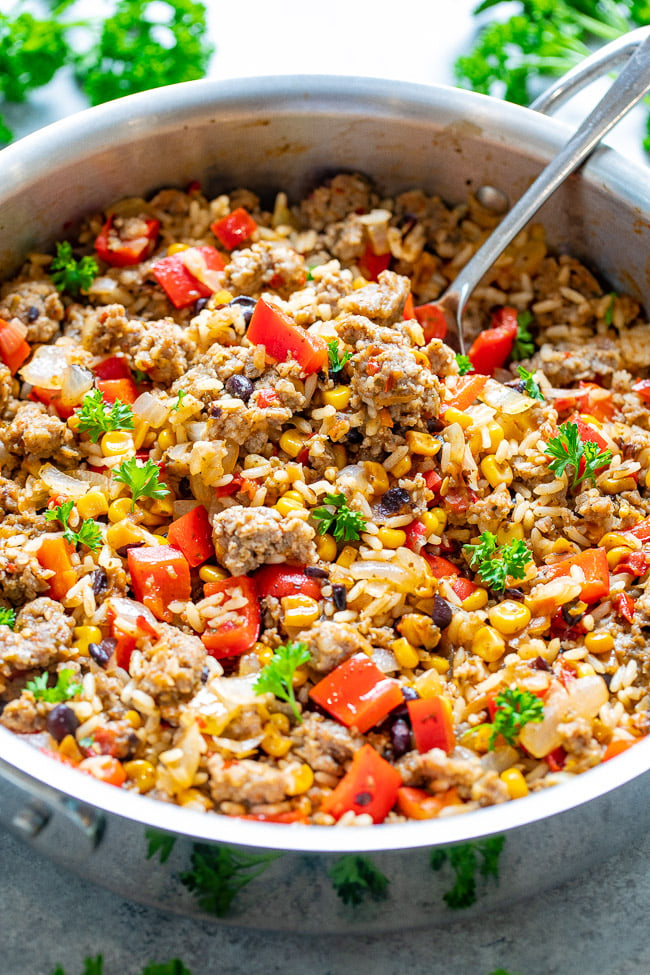 We are a participant in the Amazon Services LLC Associates Program, an affiliate advertising program designed to provide a means for sites to earn advertising fees by advertising and linking to amazon.com.

The South End of Stamford, Conn.: Master-Planned With Luxury Rentals, and Lots of Pets 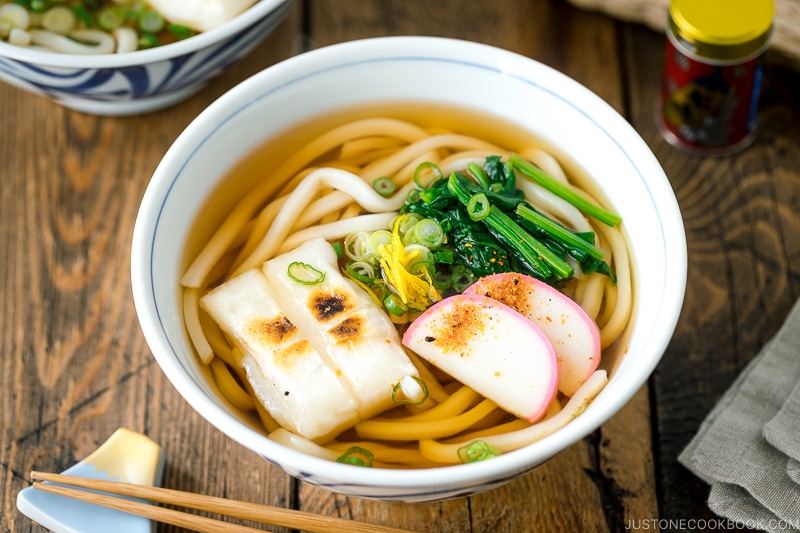 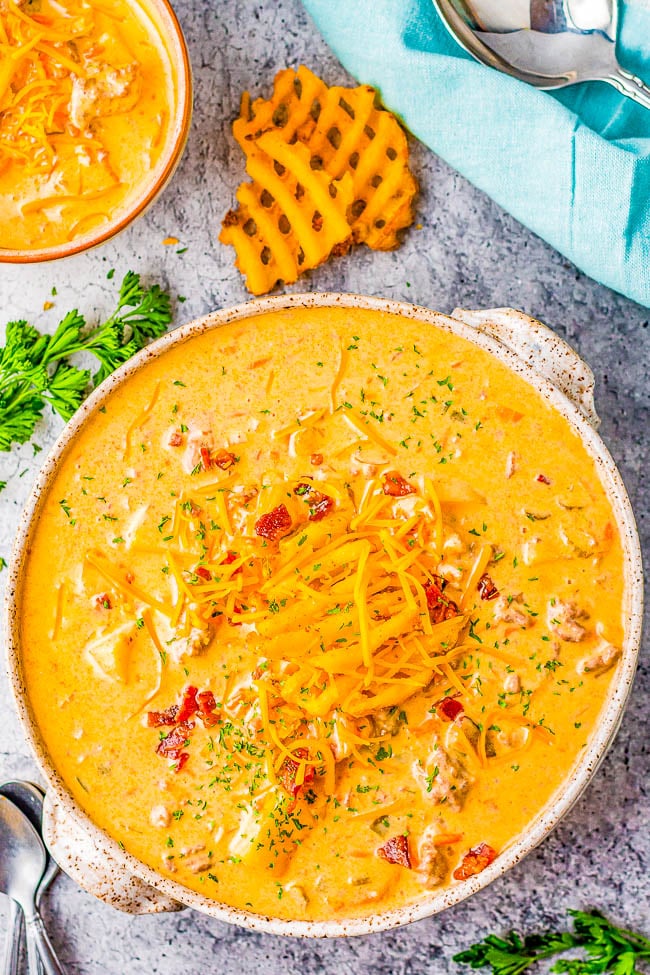 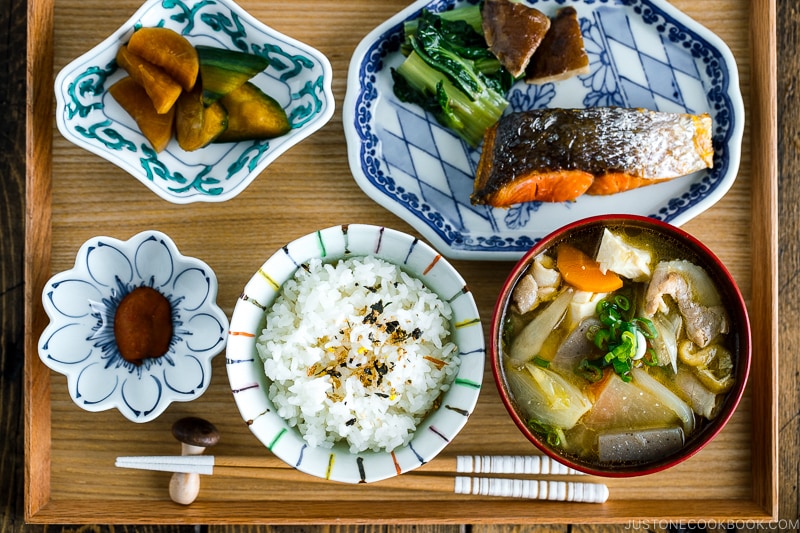 Nutrition and Food Education in Japan

Adele Show Postponed Because of Disputes, Not COVID, Sources
10 mins ago

Bored Ape Yacht Club NFTs: Everything you need to know
30 mins ago